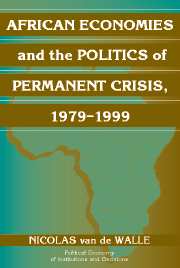 African Economies and the Politics of Permanent Crisis, 1979–1999