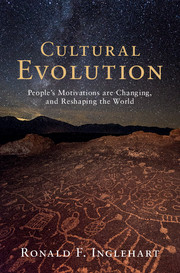 Cultural Evolution
People's Motivations are Changing, and Reshaping the World