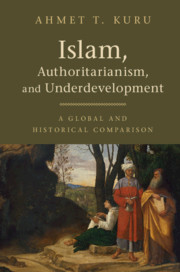 Islam, Authoritarianism, and Underdevelopment
A Global and Historical Comparison