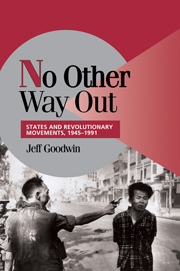 No Other Way Out
States and Revolutionary Movements, 1945–1991