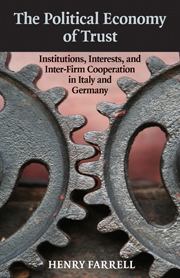 The Political Economy of Trust
Institutions, Interests, and Inter-Firm Cooperation in Italy and Germany