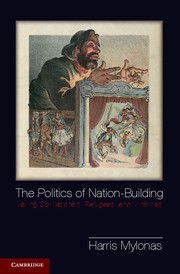 The Politics of Nation-Building
Making Co-Nationals, Refugees, and Minorities

Part of Problems of International Politics