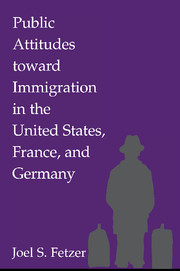 Public Attitudes toward Immigration in the United States, France, and Germany