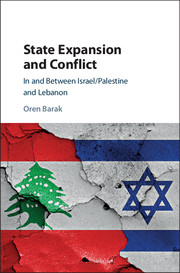 State Expansion and Conflict
In and between Israel/Palestine and Lebanon