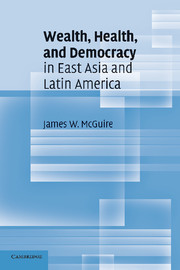 Wealth, Health, and Democracy in East Asia and Latin America