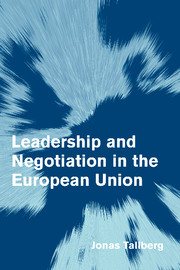 Leadership and Negotiation in the European Union

Part of Themes in European Governance