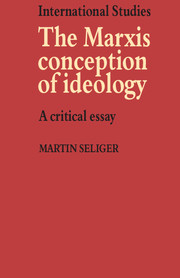 The Marxist Conception of Ideology
A Critical Essay