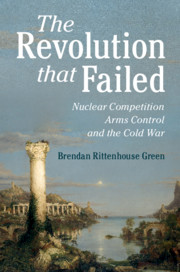 The Revolution that Failed
Nuclear Competition, Arms Control, and the Cold War