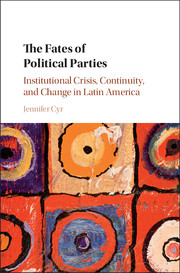 The Fates of Political Parties
Institutional Crisis, Continuity, and Change in Latin America