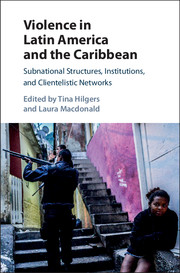 Violence in Latin America and the Caribbean
Subnational Structures, Institutions, and Clientelistic Networks