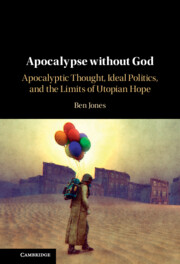 Apocalypse without God
Apocalyptic Thought, Ideal Politics, and the Limits of Utopian Hope