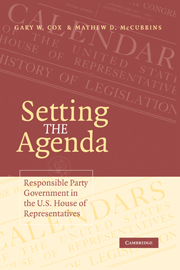 Setting the Agenda
Responsible Party Government in the U.S. House of Representatives