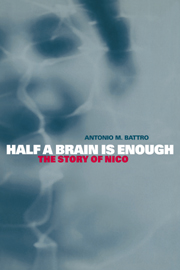 Half a Brain is Enough
The Story of Nico

Part of Cambridge Studies in Cognitive and Perceptual Development