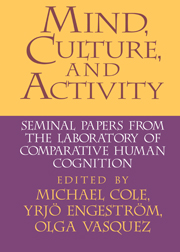 Mind, Culture, and Activity
Seminal Papers from the Laboratory of Comparative Human Cognition