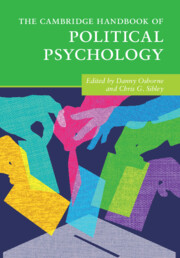 The Cambridge Handbook of Political Psychology

Part of Cambridge Handbooks in Psychology