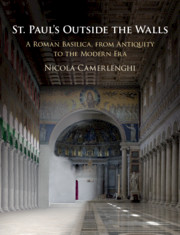 St. Paul's Outside the Walls
A Roman Basilica, from Antiquity to the Modern Era