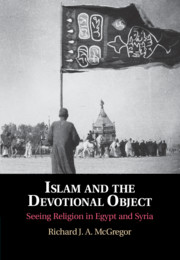 Islam and the Devotional Object
Seeing Religion in Egypt and Syria