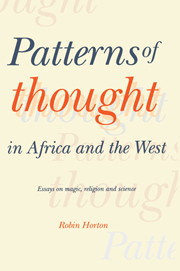 Patterns of Thought in Africa and the West
Essays on Magic, Religion and Science