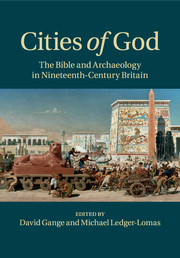 Cities of God
The Bible and Archaeology in Nineteenth-Century Britain