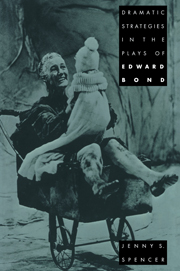 Dramatic Strategies in the Plays of Edward Bond