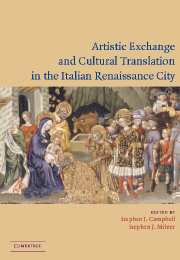 Artistic Exchange and Cultural Translation in the Italian Renaissance City