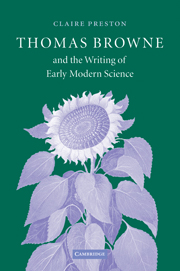 Thomas Browne and the Writing of Early Modern Science