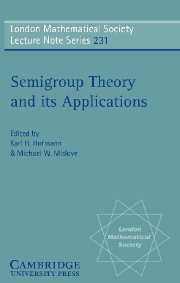 Semigroup Theory and its Applications
Proceedings of the 1994 Conference Commemorating the Work of Alfred H. Clifford