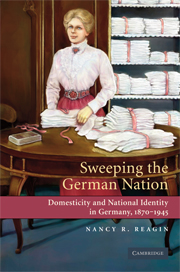 Sweeping the German Nation
Domesticity and National Identity in Germany, 1870-1945