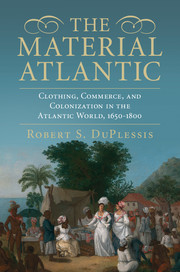 The Material Atlantic
Clothing, Commerce, and Colonization in the Atlantic World, 1650–1800