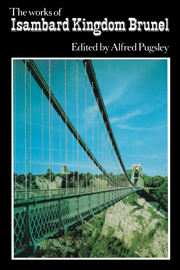 The Works of Isambard Kingdom Brunel
An Engineering Appreciation