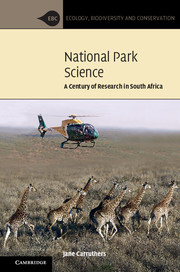 National Park Science
A Century of Research in South Africa

Part of Ecology, Biodiversity and Conservation