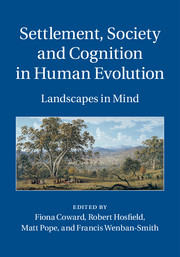 Settlement, Society and Cognition in Human Evolution
Landscapes in Mind