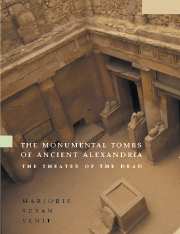 Monumental Tombs of Ancient Alexandria
The Theater of the Dead