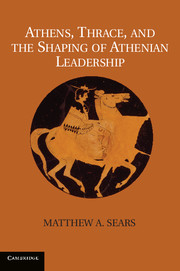 Athens, Thrace, and the Shaping of Athenian Leadership