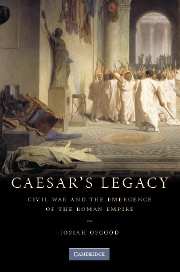 Caesar's Legacy
Civil War and the Emergence of the Roman Empire