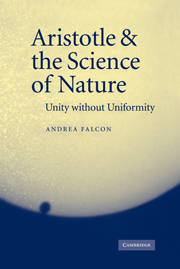 Aristotle and the Science of Nature
Unity without Uniformity