We use cookies to distinguish you from other users and to provide you with a better experience on our websites. Close this message to accept cookies or find out how to manage your cookie settings.

The Economics of Violence

How Behavioral Science Can Transform our View of Crime, Insurgency, and Terrorism 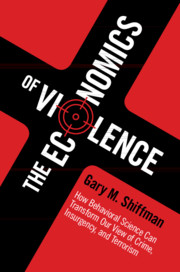 How do we understand illicit violence? Can we prevent it? Building on behavioral science and economics, this book begins with the idea that humans are more predictable than we like to believe, and this ability to model human behavior applies equally well to leaders of violent and coercive organizations as it does to everyday people. Humans ultimately seek survival for themselves and their communities in a world of competition. While the dynamics of 'us vs. them' are divisive, they also help us to survive. Access to increasingly larger markets, facilitated through digital communications and social media, creates more transnational opportunities for deception, coercion, and violence. If the economist's perspective helps to explain violence, then it must also facilitate insights into promoting peace and security. If we can approach violence as behavioral scientists, then we can also better structure our institutions to create policies that make the world a more secure place, for us and for future generations.

'As advances in behavioral science reveal the complex but animating dynamics of human behavior, all those forces that make us fear, or fight, or give us courage, or move us to some action, nefarious states and organizations are learning how to manipulate people and become drivers of violence. In his illuminating new book, national security veteran Gary M. Shiffman takes us to the edge of understanding the nexus between behavior and organized violence. This is a must read not only for leaders in the defense and security sector, but all leaders who want to better understand the opportunities and the dangers of manipulating human action.'

'Conventional wisdom often views sub-state violence as an irrational expression of religious, tribal, or ethnic identity. In his must-read book, Gary M. Shiffman offers a powerful counter, demonstrating that understanding organized violence requires analyzing individual decision-making – and the available incentives and choices. Shiffman combines his own rich experience with deep economic analysis and case studies that range from Pablo Escobar to Abu Bakr al-Baghdadi, and, in so doing, has written a definitive volume on the insights behavioral science offers to national security policymakers.'

'Readable and ambitious, The Economics of Violence uses colorful examples to sketch a common approach to studying organized crime, insurgency, and terrorism. Professor Shiffman then draws on his own experience to explain how those insights can inform combatting all three. Highly recommended for practitioners, scholars, and anyone interested in new thinking on how these threats can be contained.'

'The Economics of Violence is a pathbreaking work that argues how a more rigorous understanding of human behavior can be harnessed to counter violence more effectively. Drawing on his formidable intellect and experiences in the military, as a Senate staffer, a homeland security executive, an entrepreneur, and a security studies scholar, Shiffman makes a powerful case for this unique approach to strengthening US national security.'

'Gary M. Shiffman uses the science of economics as a tool for understanding violent human behavior, and he shows us how better to understand those who would harm us. Gary brings provocative, innovative, and exciting ideas to those seeking knowledge, clarity, and peace of mind in the promotion of freedom and security. The Economics of Violence is an exciting new book from an established and important voice in national security.'

'This is a valuable book that should set records straight about stereotypes, identity, politics, and misleading assumptions. I have been disabused of some of my assumptions, and the reader will find the recipe for combatting violent groups in the last chapter.'

'Gary M. Shiffman has always been a clarion voice in understanding the importance of behavioral science and economics in national security - never more so than in this work. In this book, Shiffman has provided a seminal study of how economic dynamics and individual decisions affect the manifestations of violence and the evolution of terrorist, militant, and criminal movements in a changing global landscape. By using an economic lens, he breaks down the orthodoxy between traditional disciplines and rigid categories of identity to understand sources of violence and how non-state actors emerge, adapt, and compete. By examining the cases of Pablo Escobar, Joseph Kony, and Osama bin Laden in this way, he is able to explain how each have acted as ‘entrepreneurs’ using force and forms of coercion to capture markets, each in his own way. This should become required reading for those seeking to understand how individual decisions drive sub-state groups and violence, and how we might use these insights to counter this violence and fight like entrepreneurs.'

'The Economics of Violence: How Behavioral Science Can Transform our View of Crime, Insurgency, and Terrorism is a model of meticulous scholarship that is expertly organized and effectively presented. An impressively informative contribution to our on-going national dialogue, especially given the dramatic impact that the pandemic is having on both the American and the Global economies … It should be noted for the personal reading lists of students, academia, governmental policy makers, and non- specialist general readers with an interest in the subject that …'

Book summary views reflect the number of visits to the book and chapter landing pages.

* Views captured on Cambridge Core between #date#. This data will be updated every 24 hours.