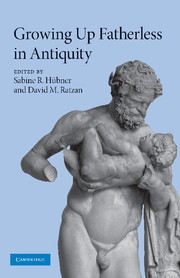 4 - Callirhoe's dilemma: remarriage and stepfathers in the Greco-Roman East

The wicked stepmother is a famous social type in Greek and Roman myth and comedy; we hear, however, comparatively little about the stepfather in antiquity. This is indubitably the reason why the stepmother in antiquity has already received a thorough treatment in a full-length study, while the stepfather has been widely neglected thus far in scholarship on the Greco-Roman family. In order to rectify this situation, I propose to survey his portrayal in the literary, legal, and documentary sources from the Roman and late antique East with a view to determining the relevance, influence, and authority he held over children who were not his own. By means of this investigation I hope to discover what the introduction of a stepfather might have meant for an otherwise fatherless child with respect to his living arrangements and emotional and economic welfare. Of course, stepfathers entail remarriage. Accordingly, this study will also attempt to shed some light on attitudes toward remarriage for widows from different ideological, sociological, and economic points of view, as well as on the relative frequency of children growing up under a stepfather in these centuries.

The stereotypical stepmother is notoriously wicked. According to Patricia Watson, this picture is “an encapsulation of the negative traits assigned to females in general by a misogynistic tradition which flourished in Greece and Rome.” While stepmothers are almost invariably shown as evil and jealous intruders, stepfathers, who occur much less frequently in our sources, are depicted in a much more balanced manner.