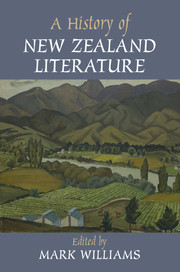 6 - Colonial Ecologies: Guthrie-Smith's Tutira and Writing in the Settled Environment

The writing of the 1930s–50s, often defined by the novelty of its attempt to articulate a sense of national identity through representing the landscape, is productively unsettled by the broader concerns of ecology that would position it within a longer historical arc of settlement's transformation of that landscape. The cultural nationalist writing of the 1930s onwards, as well as the preceding Maoriland era that it sought to differentiate itself from, is equally encompassed by the process described by James Belich as ‘recolonisation’, the export-driven expansion of farming that ‘transformed the New Zealand countryside, and considerably homogenised it’ from the 1880s onwards. As ecologists and environmental historians have pointed out, New Zealand constitutes one of the most extreme examples of the global anti-ecological project of settler colonisation: driven by the economic imperatives of the forestry industry as well as by the expansion of pastoral production, its environmental history until the mid-twentieth century is one of widespread destruction and radical transformation. It was on this violently modified and ever more industrialised terrain that New Zealand literature took its increasingly distinctive shape.

In an essay in the first volume of Landfall (1947), T. H. Scott sought to outline the typical social pattern of New Zealand's rural hinterland through a portrait of a fictional settlement named, with some irony, Te Whenua (‘The Land’). Sketching its typical features, ‘the clumps of trees and the plantations of “old man macs” and pines, the river, the “long drain”, “the factory”’, he describes how the everyday activities of its children might reveal traces of the wetland ecosystem only recently displaced:

[O]ne day they unearth … the remains of a fallen tree running under the ground. And then in imagination they add a forest of trees to the flax swamp…. Then too there are stones from a hole dug on a ridge to bury a calf. Someone, enlarging the hole, pointed out the deliberate way the layer was placed…. [H]e remarked that these were [left by] foraging Maoris who used the oven coming this way from their pa at Orimu.

And so the children create in their mind's [sic] eyes a swamp with its standing flax rising above the raupo, and see it forested at the fringes and crossed with the tracks of men.