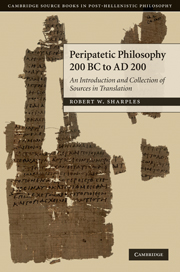 Peripatetic Philosophy, 200 BC to AD 200
An Introduction and Collection of Sources in Translation
Buy print or eBook[Opens in a new window]

Chapter 2 - The rediscovery of Aristotle’s works?

(1) From Scepsis came the Socratic [philosophers] Erastus and Coriscus and Coriscus’ son Neleus, a man who was a pupil of both Aristotle and Theophrastus, and who inherited the library of Theophrastus, which included also that of Aristotle. Aristotle had bequeathed his own [library] to Theophrastus, to whom he also left the school; [Aristotle] was the first known person to collect books, and he taught the kings in Egypt how to arrange a library. (2) Theophrastus left [the collection] to Neleus; he took it to Scepsis and bequeathed it to his descendants, lay-people, who kept the books closed away and not carefully stored. When they became aware of the eagerness of the Attalid kings, to whom the city was subject, in searching for books to furnish the library in Pergamum, they hid the books underground in a trench. Damaged by damp and bookworms, the books of Aristotle and of Theophrastus were eventually sold by the family for a large sum of money to Apellicon of Teos. Apellicon was a bibliophile rather than a philosopher; consequently, when he wanted to put right [the gaps due to] the worm holes and transferred the text to new copies, filling in [the gaps], he did not [do so] well and published the books full of errors.

(3) The early Peripatetics, after Theophrastus, did not possess the books at all, apart from a few, chiefly those published [by Aristotle himself], and the consequence was that they were not able to engage in philosophy in a serious way, but declaimed general theses. Their successors, after those books emerged, [were able] to be better philosophers and Aristotelians, but most of what they said was necessarily conjectural because of the abundance of errors [in the texts].