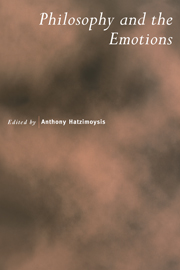 VIII - The significance of recalcitrant emotion (or, anti-quasijudgmentalism)

Sentimentalist theories in ethics treat evaluative judgments as somehow dependent on human emotional capacities. While the precise nature of this dependence varies, the general idea is that evaluative concepts are to be understood by way of more basic emotional reactions. Part of the task of distinguishing between the concepts that sentimentalism proposes to explicate, then, is to identify a suitably wide range of associated emotions. In this paper, we attempt to deal with an important obstacle to such views, which arises from the dominant tradition in the philosophy of emotion. We will be attempting to steer a middle course between the traditional view and some recent, empirically-minded criticism. A longstanding challenge to sentimentalism, raised by Philippa Foot against Hume and his descendants, concerns the relations of priority between evaluative judgment and emotional response. Foot argued that the sentiments adduced to explicate moral concepts already involve the very content they are supposed to explain. Humean sentimentalism is a mistaken enterprise, Foot concluded, because ‘the explanation of the thought comes into the description of the feeling, not the other way round.’

It is widely agreed that judgments of wrongs cannot be analysed in terms of guilt and disapproval, for instance, if these sentiments already involve the thought that someone has done wrong. This would render the account circular; and, though a few philosophers deny that such circularity is vicious, most balk at this conclusion.

But circularity is not the only danger for sentimentalism. If an independent account of an emotion's content can be given, then the appeal to emotional sensibility drops out of the picture.