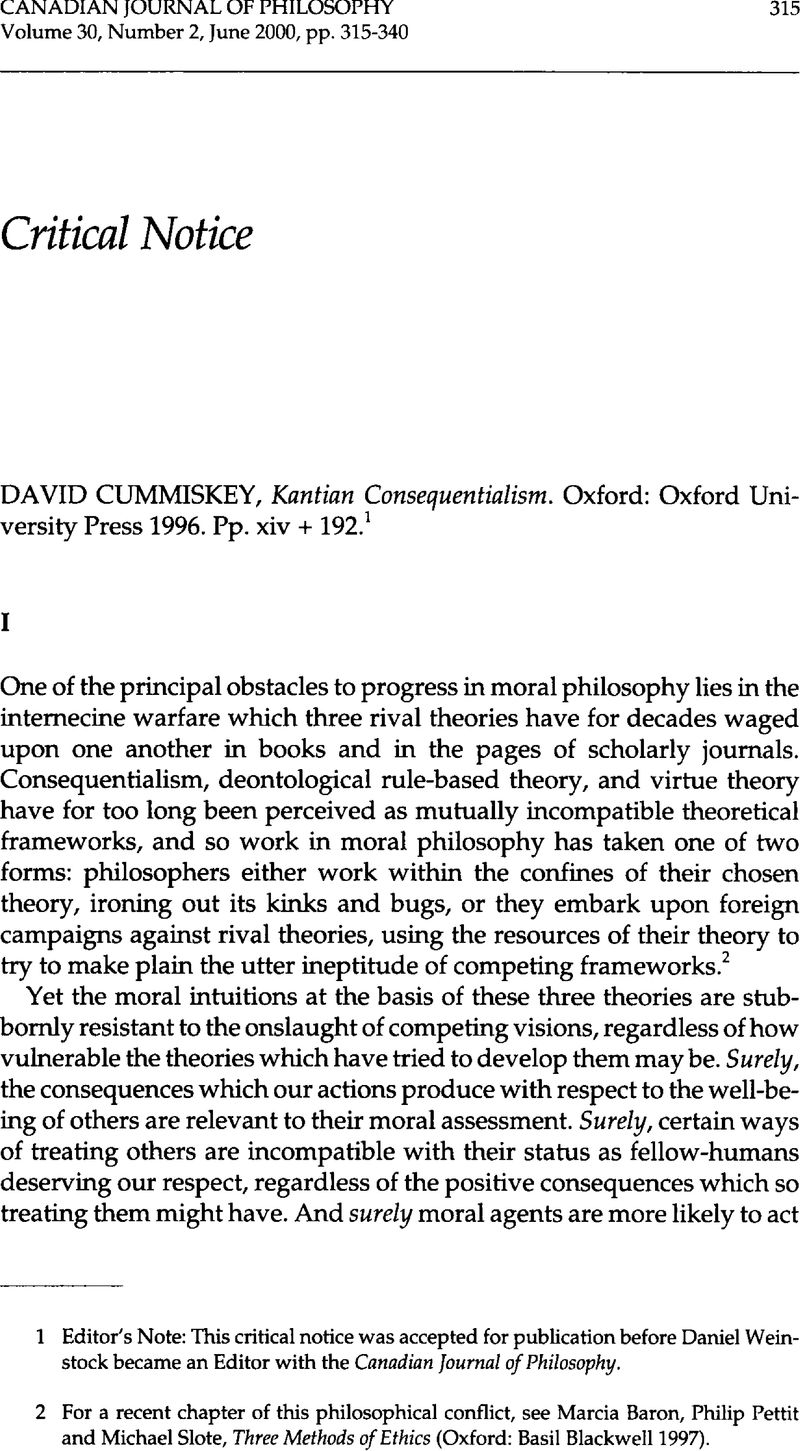 Editor's Note: This critical notice was accepted for publication before Daniel Weinstock became an Editor with the Canadian Journal of Philosophy.

3 More cursory treatments can be found in Harrison, Jonathan ‘Utilitarianism, Universalization, Heterotomy and Necessity or Unkantian Ethics,’ in Potter, N. and Timmons, M. eds., Morality and Universality (Dordrecht: D. Reidel 1985)Google Scholar and in Hare, R.M. ‘Could Kant Have Been a Utilitarian?’ in Dancy, R.M. ed., Kant and Critique (Dordrecht: Kluwer 1993)Google Scholar. Cummiskey's book will be referred to parenthetically in the body of the text.

4 For a clear and persuasive presentation of this interpretation, see Guyer, Paul ‘The Possibillity of the Categorial Imperative,’ Philosophical Review 109 (1996) 353–85Google Scholar.

5 References to Kant's Groundwork of the Metaphysics of Morals are to Paton, H.J. trans. (New York: Harper Torchbooks 1964)Google Scholar. They will be given parenthetically in the text, and will be referred to as Gr.

7 For a thorough inventory of the contents of the Kantian concept of ‘humanity,’ see Hill, 39-41; see also Korsgaard, Christine Creating the Kingdom of Ends (Cambridge: Cambridge University Press 1996), 110–14CrossRefGoogle Scholar.

8 One response apparently available to Cummiskey would be to say that happiness as he conceives of it within Kant's theory of value cannot be equated to the realization of rationally-set ends, but rather should be thought of hedonistically, as characterizing agents’ psychic states, regardless of whether these states are produced by the attainment of ends. There is good evidence however to suggest that happiness so construed could not be the goal of moral action for Kant, since it ‘could have been brought about by other causes as well, and consequently [its] production did not require the will of a rational being’ (Gr, 401).

18 For an instance of the complaint that objective theories merely provide lists without any accompanying theory, see Sumner, 45.

19 For some of the problems linked to maximization, and for some utilitarian responses to these problems, see Scarre, G. Utilitarianism (London: Routledge 1996), ch. VII.Google Scholar