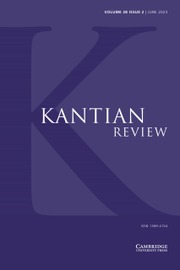 Analysis in the Critique of Pure Reason

It is widely supposed that the principal task of Kant's Critique of Pure Reason is to carry out some kind of analysis of experience. Commentators as profoundly at odds on fundamental points of interpretation as P. F. Strawson and Patricia Kitcher share this supposition. In a letter to J. S. Beck, Kant seems to endorse this view himself, referring to some unspecified stretch of the Critique as an ‘analysis of experience in general’. The idea that the Critique is engaged in an analysis of experience accords well with an attractive conception of Critical philosophy as making something explicit that is generally only implicit in our cognitive lives. After all, the categorical imperative is no innovation of Kant's practical philosophy, but rather is meant to be revealed as the animating principle of ‘ordinary moral rational cognition’. Likewise, the principles revealed in Kant's theoretical philosophy should be nothing other than the principles that necessarily animate ordinary empirical cognition; and Kant says that experience is, or is a mode of, empirical cognition. For this reason, it is undeniably compelling to think of the Critique as offering some kind of analysis of experience.

1 20 January 1792 (11: 313; 315). References to Kant's works, with the exception of the Critique of Pure Reason, refer to the volume and page of the German Academy of Sciences edition, Gesammelte Schriften, ed. Wissenschaften, Königlich Preußischen Akademie der, later the Deutschen Akademie der Wissenschaften zu Berlin. 29 volumes (Berlin: Walter de Gruyter [and predecessors], 1902–).Google Scholar References to the Critique of Pure Reason follow the pagination of the first (A) and second (B) editions. Translations are my own, but I consulted the commonly used English translations. The following abbreviations are used: G=Groundwork for the Metaphysics of Morals; KpV=Critique of Practical Reason; KrV=Critique of Pure Reason; KU=Critique of the Power of Judgement; P=Prolegomena to Any Future Metaphysics.

7 A prominent advocate of this interpretation is Strawson, P. F., in The Bounds of Sense: An Essay on Kant's ‘Critique of Pure Reason’ (London: Methuen, 1966)Google Scholar.

8 I wish to emphasize that it is not my aim to advance a sustained or detailed critique of either Kitcher's or Strawson's work. I shall be considering their respective positions largely in the abstract, and only in the context of considering – more deliberately than I think either has done – Kant's own conception of the method of the Critique.

10 The issue of the proper method of metaphysics is the topic of Kant's 1764 ‘Prize Essay’ (Untersuchung iiber die Deutlichkeit der Grundsdtze der naturlichen Theologie und der Moral, 2: 273–302).Google ScholarPubMed Decades later, Kant is still working on the same topic: for Kant claims that the Critique is a ‘treatise on the method’ of a future metaphysics (Bxxii).

11 I discuss the synthetic method at greater length in ‘Science and the Synthetic Method of the Critique of Pure Reason’, Review of Metaphysics, 59 (2006): 517–39Google Scholar.

16 How we would draw out the analogy in the case of material sciences (e.g. mathematics and physics) is complicated somewhat by the priority of Critical philosophy as a formal science assessing the capacity of reason as such. For Kant's distinction between material and formal rational cognition, see G (4: 387).

17 Some of the characteristics of Kant's general conception of scientific method - particularly its way of understanding systematicity in teleo-logical terms - figure in the two short passages that serve as general introductions to the Critique's Transcendental Analytic and Analytic of Concepts (A64-6/B89-91). See also Bxxxvii-xxxviii.

19 Examples of these tasks include the following: attributing self-identity and empirical apperception (20, 145), making judgements about objects (142), and perceiving spatial and temporal arrays (142, 156 ff.).

23 The idea is that Hume would need t o claim that it is not possible to have knowledge of some proposition, while his methodological resources only entitle him t o claim that w e d o no t actually have knowledge of it. To make a claim about our necessary ignorance thus requires a complete account of our cognitive capacity; which is to say that the Transcendental Dialectic's account of the incapacity or Unvermogen of reason must follow upon the Transcendental Analytic's account of its capacity or Vermögen.

24 Despite possible appearances to the contrary, Kant's idea that Critical philosophy must begin with a conception of the form of the whole does not presuppose what is to be demonstrated. For to know the shape of the earth is not yet to know its magnitude; and to have some preliminary conception of human reason is not yet to have determined the bounds of its capacity.

30 The first edition preface focuses on the possible status of metaphysics as a science, while the second edition preface takes a broader view, and considers a range of examples of successful scientific cognition as a platform on which to diagnose the failure of metaphysics. I will focus entirely on the second edition, giving deliberate consideration to what we are supposed to learn about reason from Kant's presentation of these examples of successful scientific cognition. In the second edition preface, Kant also points to pure general logic as a successful science; but it has a different status from mathematics and physics since it is a formal science that abstracts from all content of know-ledge, and so does not itself provide knowledge of objects of some domain, or even indicate how such knowledge is possible.

32 See B147; cf. A4/B8. Kant suggests that mathematics only yields knowledge in so far as it is applicable to what can be given in empirical intuition. Thus, the proper object of mathematical cognition is nature, and mathematics is a science of nature.

33 It encompasses considerably more because of the emphasis that is placed on scientific knowledge in Kant's articulation of the methodological framework of the Critique. Strawson overlooks this, perhaps even deliberately, as he downplays considerably the centrality of Kant's question about the possibility of synthetic a priori judging (see The Bounds of Sense, p. 43).

37 This is to leave us with the a priori representations that we (i.e. whoever assents to the account in the front matter) suppose that sensibility must contain - i.e. ‘pure intuition and the mere form of appearances’ (A22/B36).

I do not wish, at least in the present context, to challenge the viability of Kant's strategy of isolation. Indeed, whether it is even possible to consider, in any meaningful way, each element in isolation from the other is a serious question. It is the crux of Hegel's complaints about Kant's theoretical philosophy.

39 It is uncontroversial that the aim of the Transcendental Deduction is to account for the objective validity of the categories. However, the issue of whether any parallel treatment is given for space and time as the pure forms of intuition is rather controversial. Daniel Warren argues that the Metaphysical Exposition of Space (KrV§2), is concerned with the a priori origin of the representation of space; Kant is not, as Henry Allison and others have suggested, trying to establish its objective validity there (‘Kant and the apriority of space’, Philosophical Review, 107 (1998), 179-224). This leaves open the possibility that the Transcendental Expositions of space and time (KrV §3 and §5, respectively) effectively offer their transcendental deduction. Warren himself is non-committal on the issue, but seems to suggest that the demonstration of their objective validity may be postponed until the Transcendental Deduction chapter (see the final sentence of his paper, and 220 n. 53).

41 This is because the preliminary idea of the whole is supposed to contain the conditions for determining the relation of the parts.

42 Thus, the Deduction begins: ‘The manifold of representations can be given in an intuition which is merely sensible, i.e. is nothing but receptivity, and the form of this intuition can lie a priori in our faculty of representation without being anything Trther than the mode in which the subject is affected’ (B129). What cannot be given through the senses is the ‘combination of a manifold’, for this is an ‘act of spontaneity’, and an ‘action of the understanding’ (B130). (Combination is deemed an Actus der Spontaneitat, then a Verstandeshandlung, and finally an Actus of the Selbsttdtigkeit of the representing subject.) Receptivity is associated with sensibility, and spontaneity is associated with the understanding.

Kant reminds the reader of the heterogeneity thesis at crucial junctures of the text: at the end of the front matter (thus introducing the Doctrine of Elements), at the outset of the Transcendental Logic, and within the Logic, at the outset of the Transcendental Deduction. Receptivity and spontaneity do not figure in the first invocation of the heterogeneity thesis at all; they are introduced in the second, where they figure in definitions of sensibility and understanding respectively (see A51/B75). And while sensibility and understanding do make an appearance in §15, particular emphasis is placed on the receptivity/ spontaneity pair.

44 The cogito statement, on my reading, should not be identified with the principle of the synthetic unity of apperception, which alone introduces the crucial idea that all of a single subject's representations are subject to a necessary synthesis. This synthesis, as Kant argues only later in the Deduction, must be in accordance with the categories.

45 ‘The highest principle of the possibility of all intuition in relation to sensibility was according to the transcendental aesthetic that all the manifold of sensibility stands under the formal conditions of space and time. The highest principle of it [sc. intuition] in relation to the understanding is: that all the manifold of intuition stands under the conditions of the original-synthetic unity of apperception’ (§17, B136).

46 I would like to thank Markos Valaris, and two anonymous referees for this journal, for extremely helpful comments on earlier versions of this paper.

Analysis in the Critique of Pure Reason
×

Analysis in the Critique of Pure Reason
×

Analysis in the Critique of Pure Reason
×
×