From Moore's Law to More's Utopia: The Candy Crushing of Internet Law 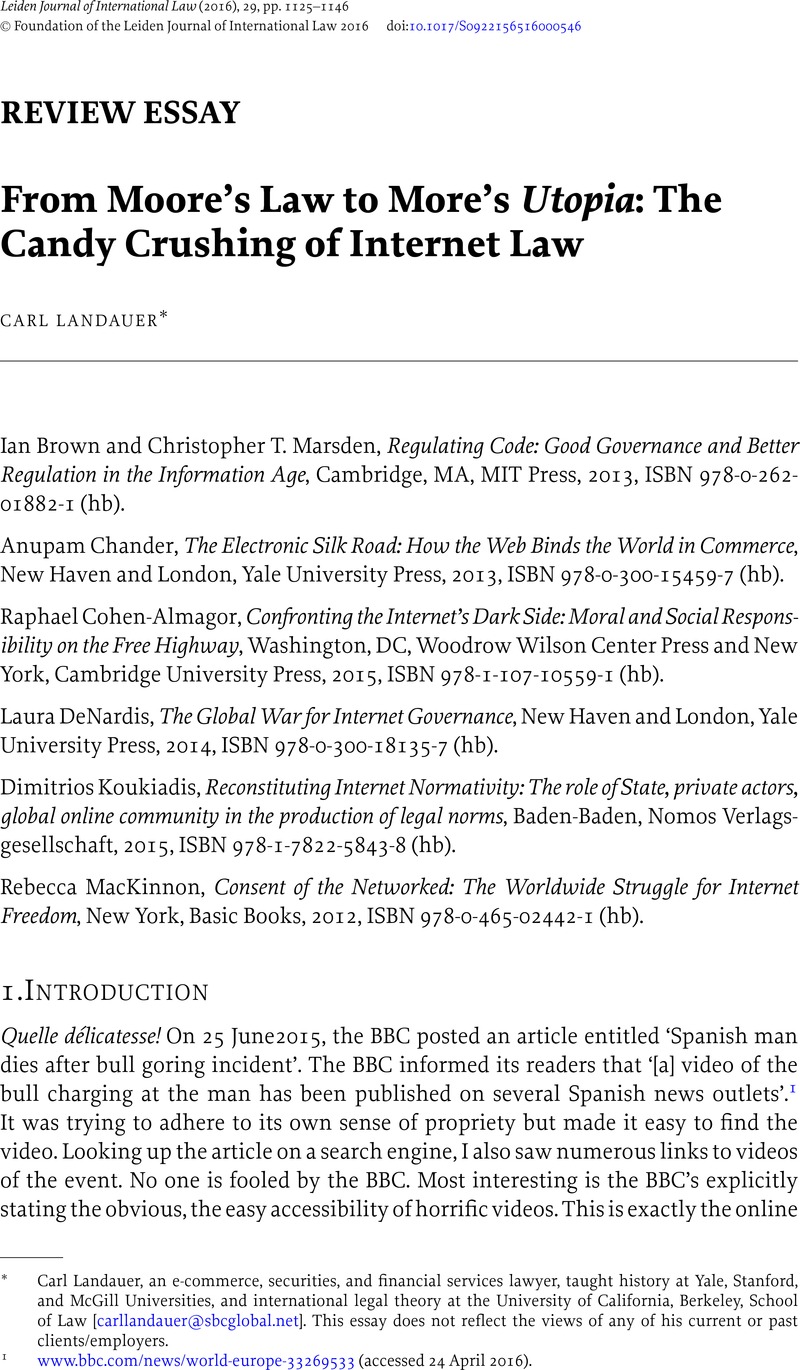 COPYRIGHT: © Foundation of the Leiden Journal of International Law 2016

3 R. Cohen-Almagor, Confronting the Internet's Dark Side: Moral and Social Responsibility on the Free Highway (2015), 91.

6 R. MacKinnon, Consent of the Networked: The Worldwide Struggle for Internet Freedom (2012), 96.

10 M. McClure, Meat Science Essays (1966), 7. McClure told me he no longer worries about the need to save that word but worries about other forms of censorship (discussion with author, 29 September 2015).

12 The Internet Corporation for Assigned Names and Numbers is a private non-profit corporation initiated by US government responsible for much of the broad structural elements of the Internet, such as Internet Protocol (IP) address space allocation, protocol identifier assignment, generic (gTLD) and country code (ccTLD) Top-Level Domain name system management, and root server system management.

34 The Financial Times found Google's restructuring of its venture fund newsworthy, ‘Google abandons European venture fund’, 11 December 2016. Regarding ‘disruption’, it ran a special section on 7 December 2015 on ‘Disruption & Technology’, if only four pages.

35 I. Brown and C.T. Marsden, Regulating Code: Good Governance and Better Regulation in the Information Age (2013), 174.

51 Y. Benkler, The Wealth of Networks: How Social Production Transforms Markets and Freedom (2006), 2.

60 Brown and Marsden observe about US privacy law: ‘At the other end of the scale, there is clearly less protection for individual privacy in the US legal system than in most other advanced economies. Outside the federal government, regulation is patchy, sector specific, and state-by-state, with limited individual rights and enforcement only under very specific circumstances by the FTC.’, Brown and Marsden, supra note 35, at 64. Nevertheless, they could have added that certain areas of key concern, such as medical, financial services, and educational records, come under specific federal rules. For a good overview of US privacy law, see T.J. Toohey, Understanding Privacy and Data Protection: What You Need to Know (2014).

61 Cohen-Almagor, supra note 3, at 222. Search engine optimization involves working algorithms used by search engines to order results, and businesses use specialists to enhance their sites’ moving up among the results.

73 See, e.g., Chander, supra note 8, at 110. ‘Thus far, ICANN has chosen to apply its authority as a choke-point only on behalf of trademark holders.’ Few seem to note that trademarks are identified by specific classifications of goods and services. DeNardis is rare in acknowledging that ‘[i]n trademark law, it is possible for two registered trademarks to be identical, just registered as different classes of goods or services’. DeNardis, supra note 15, at 192. The classifications generally follow the 1957 Nice Agreement for the Classification of Goods and Services.

117 G. Debord, Comments on the Society of the Spectacle (trans. M, Imrie, 1990; originally Commentaires sur la societé du spectacle, 1988), 48. Debord on McLuhan is particularly interesting: ‘McLuhan himself, the spectacle's first apologist, who had seemed to be the most convinced imbecile of the century, changed his mind when he finally discovered in 1976 that “the pressure of the mass media leads to irrationality”, and it was becoming urgent to modify their usage.’ Ibid., at 33.

120 N. Carr, The Shallows: What the Internet is Doing to Our Brains (2010); S. Greenfield, Mind Change: How Digital Technologies are Leaving Their Mark on Our Brains (2015).

123 See M. Zuckerberg's Facebook post: www.facebook.com/zuck/posts/10102329188394581 (accessed 24 April 2016). Interestingly, he exclaimed, ‘On Monday, 1 in 7 people on Earth used Facebook to connect with their friends and family’, which uses the past tense – there is no telling how many have left Facebook and also how many ‘users’ are entities.

125 The Financial Times spoke in ‘Laying the Foundations’, of an online population of 400 million in 2015 projected to reach 600 million by 2020 in its article on Narenda Modi's proposed initiatives (15 January 2015); it analyzed the opportunities for smartphone expansion in sub-Saharan Africa (27 January 2016); and the New York Times reported Facebook's goal of tripling the size of its 1.6 billion user base, which envisioned revolutionizing the cost of technology (25 April 2016).

130 As Castells notes, ‘most countries are creating a deeper digital divide’, Castells, supra note 30, at 262.

134 Although there are Chinese keyboards developed in the 1980s that provide for the elements of characters, they are not used in mobile devices.

* Carl Landauer, an e-commerce, securities, and financial services lawyer, taught history at Yale, Stanford, and McGill Universities, and international legal theory at the University of California, Berkeley, School of Law [carllandauer@sbcglobal.net]. This essay does not reflect the views of any of his current or past clients/employers.

From Moore's Law to More's Utopia: The Candy Crushing of Internet Law