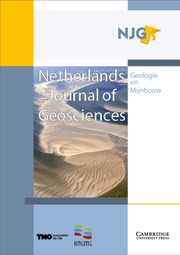 Stable isotopes, niche partitioning and the paucity of elasmosaur remains in the Maastrichtian type area

Remains of elasmosaurid plesiosaurs are exceedingly rare in the type-Maastrichtian strata (Late Cretaceous, southeast Netherlands and northeast Belgium), in stark contrast to relatively common skeletal remains of mosasaurs. Here, we present an analysis of δ13C stable isotope values for tooth enamel of two elasmosaur teeth from the type Maastrichtian. The δ13C signal is a proxy for foraging area, trophic level and diving behaviour, the net value of which in these rare elasmosaurs turns out to be not noticeably different from that for the much commoner mosasaurs in the type Maastrichtian. Therefore, the rarity of elasmosaurs in the area probably reflects a primary near-absence of such reptiles during the latest Cretaceous, rather than a taphonomic artefact.

Type-Maastrichtian strata (southeast Netherlands and northeast Belgium) preserve a rich and diverse record of Late Cretaceous (c. 67–66 Ma) marine life (Mulder, Reference Mulder2003). Aquatic tetrapods from these levels are represented by several taxa of mosasaurs and marine turtles, as well as elasmosaurs, birds and crocodylians. While two species of mosasaur are relatively common, three others – the Globidensines – are only rarely encountered (Schulp et al., Reference Schulp, Vonhof, van der Lubbe, Janssen and van Baal2013, and references therein) and discoveries of elasmosaur, bird and crocodile remains are equally few and far between (Mulder, Reference Mulder2003; Dyke et al., Reference Dyke, Schulp and Jagt2008). In contrast, isolated bones of carapaces and appendicular skeletons of marine turtles are comparatively common (Janssen et al., Reference Janssen, van Baal and Schulp2011). By comparing the δ13C stable isotope signal derived from the tooth enamel of mosasaurs and elasmosaurs, we here attempt to identify the underlying cause(s) of the observed pattern of relative abundance and rarity of mosasaurs and elasmosaurs, respectively, in the record for the type Maastrichtian. 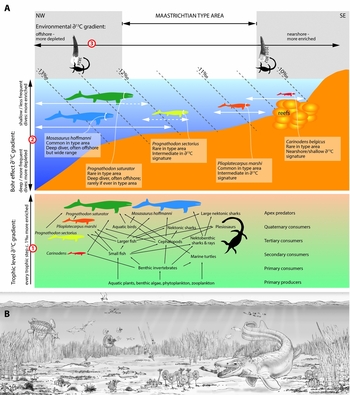 Fig. 1. (A) Tooth enamel δ13C in the type-Maastrichtian ecosystem in mosasaurs and elasmosaurid plesiosaurs. The δ13C values are determined by (1) trophic level, (2) diving behaviour and (3) foraging area. The marine Maastrichtian food web was expanded following Sørensen et al. (Reference Sørensen, Surlyk and Lindgren2013); mosasaur silhouettes after Lindgren et al. (Reference Lindgren, Kaddumi and Polcyn2013). (B) A near-typical, type-Maastrichtian ‘seascape’, with elasmosaurs conspicuously absent. However, the presence of Prognathodon saturator (on the right) must have been a relatively rare event in these shallow waters. Reconstruction by Erik Jan Bosch (Naturalis, Leiden), with input from NHMM (JWMJ).

By Mulder's (Reference Mulder, Bardet, Godefroit and Jagt2000) count, the entire type-Maastrichtian elasmosaur record then known comprised seven vertebrae and a handful of teeth, which is exceedingly meagre considering the more than two centuries of intensive collecting effort invested. In view of the fact that the δ13C signal as preserved in tooth enamel presents a proxy representing the combined signal of diet, foraging area and diving behaviour (Clementz & Koch, Reference Clementz and Koch2001; Biasatti, Reference Biasatti2004; Robbins et al., Reference Robbins, Ferguson, Polcyn and Jacobs2008; Schulp et al., Reference Schulp, Vonhof, van der Lubbe, Janssen and van Baal2013, and references therein), the signal as preserved in elasmosaur teeth from the type Maastrichtian could potentially yield information on how foraging area and niche exploitation of elasmosaurs compares to mosasaurs. A possible explanation for the rarity of elasmosaurs, as compared to mosasaurs, in the type Maastrichtian might well revolve around mutually exclusive resource partitioning, with foraging areas much further offshore preferentially exploited by elasmosaurs – this hypothesis we put to the test in the present note.

We fully realise that the near-absence of elasmosaur teeth in the type-Maastrichtian record has an impact on the size of the available dataset as well. This limited number of fossil remains calls for additional restraint in destructive testing. At this point, only two samples could be analysed from two teeth available to us.

The two enamel samples analysed yielded δ13C values of −10.16‰ and −12.50‰ (NHMM MND.K.20.01.802 and NHMM 003824, respectively). Both values fall within the range observed for co-occurring mosasaurs (Schulp et al., Reference Schulp, Vonhof, van der Lubbe, Janssen and van Baal2013) and as such do not a priori set elasmosaurs apart from mosasaurs in terms of ecological proxies discussed above. This is similar to the pattern observed by Strganac et al. (Reference Strganac, Jacobs, Polcyn, Mateus, Myers, Salminen, May, Araújo, Ferguson, Olímpio Gonçalves, Morais, Schulp and da Silva Tavares2015) in the Late Cretaceous of Angola, the only other published study we are aware of in which the δ13C signal of multiple samples of plesiosaurs and a range of mosasaur taxa from the same ecosystem are compared.

Figure 1A presents an attempt to map and summarise the three main drivers in δ13C values that are preserved in tooth enamel in a single palaeoenvironmental/palaeoecological framework: (1) every trophic step pushes δ13C values to become c. 1‰ more enriched; (2) through the Bohr effect, deep diving results in more depleted values; and (3) an offshore and/or deepwater foraging area also results in more depleted values (Clementz & Koch, Reference Clementz and Koch2001; Biasatti, Reference Biasatti2004; Schulp et al., Reference Schulp, Vonhof, van der Lubbe, Janssen and van Baal2013, and references therein). Taken together, these three drivers allows us to draw, at any given trophic level, a series of diagonal isolines for δ13C values in the diagram, combining diving behaviour and foraging areas which, in turn, permits pinpointing the position that the different species occupied in the ecosystem. The exact slope and position of the isolines in this schematic diagram obviously cannot be quantified, particularly since palaeodepth is greatly exaggerated in comparison to the lateral extent of the platform, but the general geometry and values encountered in the nearshore and offshore area are expected to have been roughly along the lines illustrated.

We first discuss the position occupied by mosasaurs, before evaluating that potentially taken by the two elasmosaur samples in this scenario. From a taphonomic point of view, we wish to stress that the type-Maastrichtian strata provide only a narrow window into a more extensive ecosystem, ranging from a nearshore/reefal setting (far right side of the diagram; southeast) to a much deeper-water setting (left side of the diagram; northwest). With only the median portion of the diagram directly represented in the type-Maastrichtian fossil record, material washed down from the reef, transported by ‘float and bloat’, and the occasional (accidental) immigrant, could account for rare occurrences in this record, and vice versa, rare occurrences in the fossil record as preserved in the central part of the diagram provide an occasional glimpse of the fauna in more distant reaches of the area.

Stable isotope analysis suggests the small, durophagous mosasaur Carinodens belgicus to have occupied a more nearshore/shallow-water niche (right side of the diagram). In all likelihood, this species foraged in the more nearshore, even shallower, reaches of the basin, towards what is now the German border. This pattern is in some ways reflected in the relative abundance of Carinodens at the various quarries and outcrops. Whereas the westernmost, relatively deepwater/offshore quarries (e.g. ENCI, CBR-Romontbos and CBR-Lixhe; see Schulp, Reference Schulp2005, fig. 1A) have yielded remains of several mosasaur taxa, occurrences of Carinodens (by no means statistically significant given the small number of specimens) appear to be commoner in the easternmost (more nearshore) outcrops of the type Maastrichtian (Schulp, Reference Schulp2005). Conversely, the sole records of Prognathodon saturator (Fig. 1B, right), a mosasaur presumably preferring a more deepwater/offshore habitat (Schulp & Jagt, Reference Schulp and Jagt2015), are all from the more westerly outcrops in the Sint Pietersberg area.

In a reconstructed Late Cretaceous marine food web (based on Sørensen et al., Reference Sørensen, Surlyk and Lindgren2013, with the five mosasaur taxa from the type Maastrichtian inserted; Fig. 1A), both elasmosaur samples analysed and mosasaurs occupy a position that ranges from secondary consumers up to apex predator, which could account for a range of c. 3‰ difference in δ13C value at most. It must be emphasised that, although (large) apex predators would be expected to display enriched values in comparison to predators lower in the food chain, the reverse is observed here, with larger animals generally displaying more depleted values. This difference must, then, be further explained by foraging area and diving behaviour, the combined signal of which clearly more than offsets the expected enrichment by trophic level.

In terms of tooth shape, which is an indicator of dietary specialisation (e.g. Massare, Reference Massare1987), the curved, pointed teeth of elasmosaurid plesiosaurs find their nearest analogue in terms of tooth shape in the mosasaur Plioplatecarpus marshi. The δ13C values observed in the two elasmosaur samples do indeed overlap with values obtained for that presumably piscivorous and relatively common taxon and those of the (much rarer) mosasaur Prognathodon sectorius.

Assuming that the biochemical pathways in enamel development are similar in mosasaurs and plesiosaurs, the two δ13C values obtained from the elasmosaur teeth (−10.16 and −12.50‰) place the latter well within the range occupied by mosasaurs in the diagram (Fig. 1A), in other words, in an ecological setting which would be conducive to fossilisation in a similar fashion to that for co-occurring mosasaurs. Clearly, this is not reflected in the fossil record, and it would appear more likely that the observed rarity of elasmosaurs in the type-Maastrichtian ecosystem is a genuine reflection of the near-absence of these animals in the wider area (Fig. 1B), rather than a taphonomic artefact on a more local scale with elasmosaurs occupying a more offshore habitat.

This near-absence of elasmosaurs in the epicontinental shallow ‘Maastricht sea’ is in accordance with the observation that a relative abundance of these animals is recorded solely in Late Cretaceous marginal seas such as the coast of California and in the Maastrichtian of Morocco, where the presence of a nearby abrupt continental slope coincided with upwelling of nutrient-enriched water, which led to high biomass. Apparently, this was the sine qua non for open-water predators such as elasmosaurs (Mulder et al., Reference Mulder, Bardet, Godefroit and Jagt2000).

Many thanks to Suzan Verdegaal (Vrije Universiteit Amsterdam) for help in sample analysis, to Erik Jan Bosch (Naturalis, Leiden), who prepared Figure 1B and Sven Sachs (Naturkunde-Museum Bielefeld, Germany) for his helpful review of an earlier version of the manuscript.

Stable isotopes, niche partitioning and the paucity of elasmosaur remains in the Maastrichtian type area
×

Stable isotopes, niche partitioning and the paucity of elasmosaur remains in the Maastrichtian type area
×

Stable isotopes, niche partitioning and the paucity of elasmosaur remains in the Maastrichtian type area
×
×