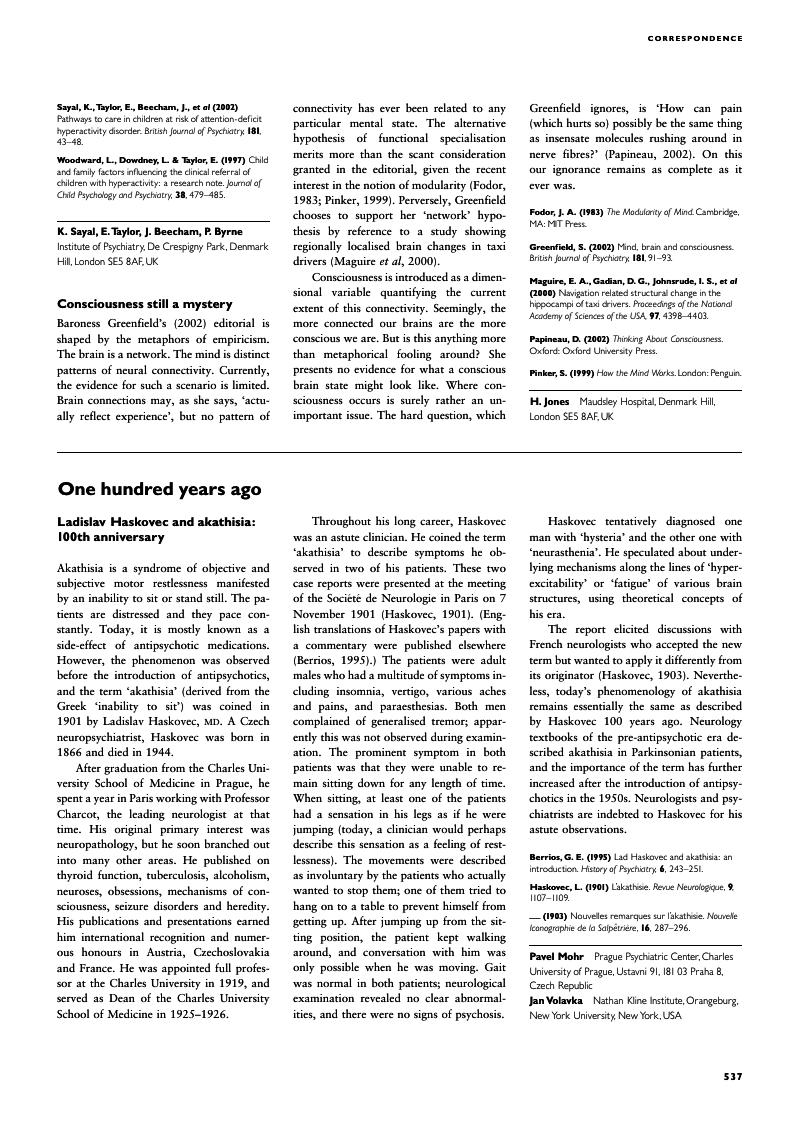 An abstract is not available for this content so a preview has been provided. To view the full text please use the links above to select your preferred format.
Type
Columns
Information
The British Journal of Psychiatry , Volume 181 , Issue 6 , December 2002 , pp. 537
DOI: https://doi.org/10.1192/bjp.181.6.537-a[Opens in a new window]
Copyright
Copyright © Royal College of Psychiatrists, 2002

Akathisia is a syndrome of objective and subjective motor restlessness manifested by an inability to sit or stand still. The patients are distressed and they pace constantly. Today, it is mostly known as a side-effect of antipsychotic medications. However, the phenomenon was observed before the introduction of antipsychotics, and the term ‘akathisia’ (derived from the Greek ‘inability to sit’) was coined in 1901 by Ladislav Haskovec, MD. A Czech neuropsychiatrist, Haskovec was born in 1866 and died in 1944.

After graduation from the Charles University School of Medicine in Prague, he spent a year in Paris working with Professor Charcot, the leading neurologist at that time. His original primary interest was neuropathology, but he soon branched out into many other areas. He published on thyroid function, tuberculosis, alcoholism, neuroses, obsessions, mechanisms of consciousness, seizure disorders and heredity. His publications and presentations earned him international recognition and numerous honours in Austria, Czechoslovakia and France. He was appointed full professor at the Charles University in 1919, and served as Dean of the Charles University School of Medicine in 1925-1926.

Throughout his long career, Haskovec was an astute clinician. He coined the term ‘akathisia’ to describe symptoms he observed in two of his patients. These two case reports were presented at the meeting of the Société de Neurologie in Paris on 7 November 1901 (Reference HaskovecHaskovec, 1901). (English translations of Haskovec's papers with a commentary were published elsewhere (Reference BerriosBerrios, 1995).) The patients were adult males who had a multitude of symptoms including insomnia, vertigo, various aches and pains, and paraesthesias. Both men complained of generalised tremor; apparently this was not observed during examination. The prominent symptom in both patients was that they were unable to remain sitting down for any length of time. When sitting, at least one of the patients had a sensation in his legs as if he were jumping (today, a clinician would perhaps describe this sensation as a feeling of restlessness). The movements were described as involuntary by the patients who actually wanted to stop them; one of them tried to hang on to a table to prevent himself from getting up. After jumping up from the sitting position, the patient kept walking around, and conversation with him was only possible when he was moving. Gait was normal in both patients; neurological examination revealed no clear abnormalities, and there were no signs of psychosis.

Haskovec tentatively diagnosed one man with ‘hysteria’ and the other one with ‘neurasthenia’. He speculated about underlying mechanisms along the lines of ‘hyper-excitability’ or ‘fatigue’ of various brain structures, using theoretical concepts of his era.

The report elicited discussions with French neurologists who accepted the new term but wanted to apply it differently from its originator (Reference HaskovecHaskovec, 1903). Nevertheless, today's phenomenology of akathisia remains essentially the same as described by Haskovec 100 years ago. Neurology textbooks of the pre-antipsychotic era described akathisia in Parkinsonian patients, and the importance of the term has further increased after the introduction of antipsychotics in the 1950s. Neurologists and psychiatrists are indebted to Haskovec for his astute observations.