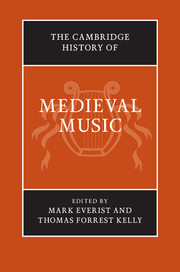 from Part I - Medieval Rome and Ancient Rites

from Part I - Chant, Liturgy, and Ritual