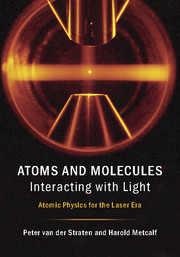 One of the major achievements in physics during the last two decades of the twentieth century was the ability to cool and trap atoms [1]. Laser cooling can produce previously inconceivable atomic temperatures of less than 1 μK. Atoms with sufficiently low kinetic energy can be trapped in magnetic and optical traps and thus studied for a prolonged time, thereby improving the resolution of spectroscopy by many orders of magnitude as well as reducing Doppler broadening. Furthermore, besides the external degrees of freedom, the internal degrees of freedom of the atoms can also be manipulated, leading to full control of the atoms. One of the holy grails of physics, the achievement of Bose–Einstein condensation in a dilute gas, was achieved mainly because of laser cooling and trapping of atoms.

One of the natural extensions of laser cooling and trapping of atoms is the application of the techniques to molecules. Molecules offer a much richer internal structure than atoms, and thus provide extended possibilities to experimentalists. However, atomic laser cooling is based on the repetitive scattering of light and requires a closed, or at least nearly closed, two-level system. Because of the complicated internal structure of molecules, a closed two-level system cannot usually be found because they have many different electronic, vibrational, and rotational states and in general can decay to many different states after absorption of light (see Chap. 16). This requires a complete rethinking of the schemes that are used to cool atoms.

Still, because of the extended possibilities cold molecules can offer with respect to cold atoms, there have been a large number of techniques developed to slow, cool, and trap them. These techniques can be divided into two classes, namely direct and indirect cooling.

In the first case, molecules at cryogenic or room temperature are directly slowed and cooled. Although many different slowing techniques are used, this chapter focuses on Stark slowing of molecules since it was the first technique developed. Apart from the Stark shift of the molecules, the Zeeman and light shift of molecules can also be used to slow them. The idea behind Stark slowing is to subject the moving molecules to a continuously increasing electric field so that their kinetic energy is converted into potential energy.