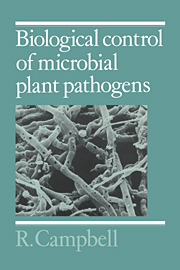 There are some diseases that clearly can be described as stem diseases such as wound infections, timber decays and stem cankers on forest and orchard trees, and also wilts like Dutch elm disease. Crown gall classically infects stem bases, but may also cause galls on roots. We will consider all of these in this chapter, but there are some stem base diseases that are excluded and will be dealt with in Chapter 5 on roots: these include the cereal stem base complex of eyespot, sharp eyespot and Fusarium which are all trash- or soil-borne diseases. Similarly the seedling diseases such as damping off, which may affect stems, are considered in Chapter 7, and fire blight, which eventually causes death of stems, is described under infections of flowers (Chapter 6).

Most of the infections that we will consider are therefore of woody stems or twigs. There are rather few diseases of herbaceous annual stems, possibly because, in comparison with leaves, they are hard to penetrate and rather low in nutrients. Woody stems are a very specialized habitat, and one in which biological control has been most effective. They are generally covered by waterproof bark, rich in tannins and phenols, which successfully excludes most organisms. There are fungi and some bacteria growing on bark but they use it mainly as a growing surface and derive very few nutrients from it. The wood itself has very low numbers of micro-organisms in it when young and healthy and it is therefore relatively easy to introduce inocula and have colonization since there is very little competition.