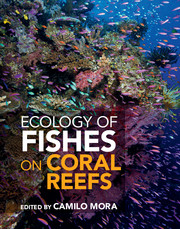 from PART II - PATTERNS AND PROCESSES

The primary measurement made of reef fishes is abundance, which is used to compare populations and understand the processes affecting their dynamics. Abundance is typically expressed as counts of individuals or total biomass, conveying distinct but related information about the state of a fish population or community at a given point in time. Total community abundance varies at scales ranging from entire ocean basins to habitat patches on individual reefs, due to a range of processes that vary in relative importance at different scales. At local to regional scales, abundance changes between and within species in accordance with well-established macro-ecological patterns: variation in abundance among species typically follows a log-normal distribution, while temporal variation within species conforms to Taylor's power law. Changes in the relative abundance of species occur at all scales and reflect the aggregate effects of species-specific responses to scale-specific processes. The diverse and multi-scale patterns of variation in fish abundance suggest that the application of hierarchical models, which explicitly specify the scales at which different processes influence abundance, will lead to a more holistic understanding of reef fish ecology.

Abundance is the most commonly measured quantity in studies of reef fishes. It is also a major determinant of the effect that a population of reef fishes has in a coral reef ecosystem. Reef fish abundance may be measured in numbers of individuals or estimates of population biomass, conveying distinct but related information about the state of a reef fish community. Counts (or densities, if normalized to a sample area) are more common, presumably due to their greater ease of collection. However, there is growing evidence that trained observers are able to estimate fish lengths with only minimal bias [736], and that, in conjunction with reliable taxon-specific length–weight relationships, biomass estimates can be reliably obtained [74]. Because the extent to which a species can perform ecological functions (e.g. consume algae, or provide nutrition for humans) often depends upon population biomass more strongly than numerical abundance, biomass has become increasingly important in reef ecosystem research.